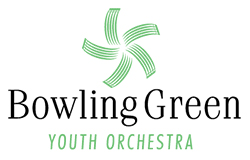 Freshman Connor Nichols is a new cellist for the Bowling Green Youth Orchestra (BGYO), a program run by Kentucky Orchestra for the musically talented. Connor has been playing cello since 5th grade, but he originally didn’t want to play cello. He wanted to become a bassist, but after hearing someone play a beautiful cello solo, he switched instruments.

He found out about BGYO through a friend who said he should join and also through the director of BGYO, Brian St. John. St. John also happens to be WKU’s orchestra conductor.

To be accepted into BGYO, Connor had to practice diligently. For his audition, he had to play a 2-3 octave scale of his choice and then had to play 2-3 minutes of a piece he had prepared beforehand.

He said, “It’s (BGYO) a lot more difficult. You definitely have to put more work into it.” Due to BGYO only meeting once a week, less often than a school strings program, Connor mentions you have to practice on your own time, making BGYO more laborious.

Connor says that BGYO is a new, but good, experience for him and there is a lot of talent amongst the BGYO kids, so it is a big accomplishment for him to be accepted. He states that since it is a full orchestra and not just strings, he felt more accomplished by being accepted into BGYO, rather than All-District, which he was a part of in 8th grade.

Connor recommends that students try out for BGYO. “It’s definitely a good learning experience. If you take your instrument seriously, even to the smallest degree, you have to play with a full orchestra.”  He also says that BGYO makes learning music even more enjoyable than it already was for him. He says that Brian St. John is passionate about music and that makes learning enjoyable. “He’s there to make music, it’s what he wants to do.”

Other kids in band or strings, who are advanced in reading and playing music, can get into BGYO next school year by practicing and contacting Brian St. John for an audition or getting information from their directors.

This semester, BGYO is playing In the Hall of the Mountain King by Edward Grieg; Hungarian Dances No. 5 and No. 6 by Johannes Brahms; Procession of the Nobles by Nikolai Rimsky-Korsakov; Nimrod from Enigma Variations by Edward Elgar; Danse Bacchanale from Samson and Delila by Charles- Camille Saint-Saens; and Berceuse and Finale from The Firebird Suite by Igor Stravinsky. The concert will be in April, however a certain date and time is yet to be announced.