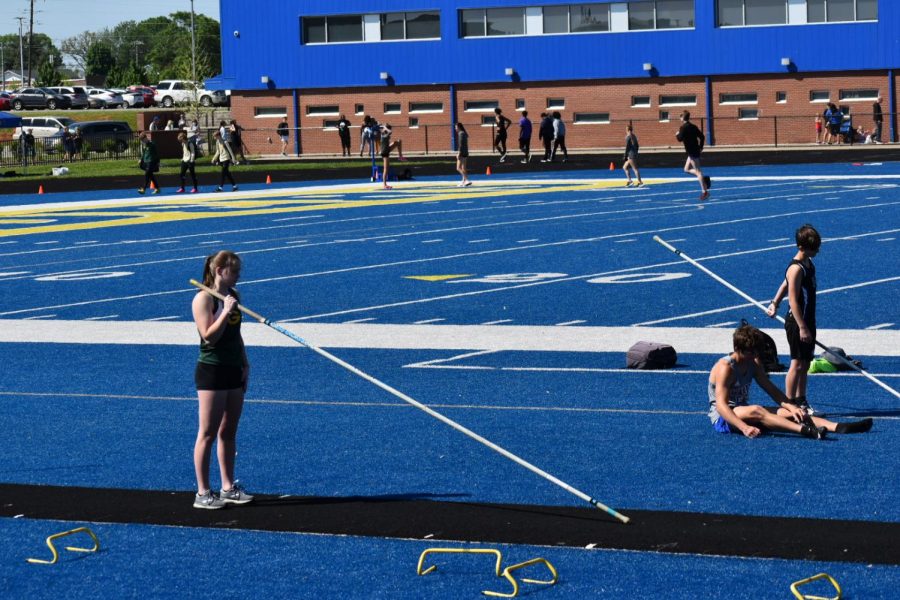 Track and field is one of the largest sports programs here at the Swamp, but one of the less celebrated events is pole vaulting. Of the few athletes that qualified for state this year, pole vaulter Jessica Peterson, was able to join the ranks. As she enters her junior year, she hopes for a great season despite the many challenges she faces.

The pole vaulting event has athletes launch themselves into the air and over a bar by using a pole to propel themselves upward. This event is often excluded when a pole vaulting pit is not available, a common problem in the state of Kentucky. The Greenwood team does not have a pit at their home facilities. Instead, athletes must go to Warren East High School to practice pole vaulting. Circumstances like this make practice very difficult for the up-and-coming athletes.

“Pole vaulting is different because you can’t talk it through, you just have to do it,” Peterson said when asked about practicing the sport. She and the other vaulters often only get a chance to practice once or twice a week at Warren East during the season, so they have to make each practice count that much more.

“The biggest challenge [at practice] is making sure I’m able to correct myself because we don’t have a [vaulting] coach there,” she stated. “I have to be able to look at footage… or just be able to feel what I did wrong.” Her hard practices paid off when she qualified for the state championship after winning the region championship. During her region championship victory, she participated in a vault-off, where you continue to vault until someone misses their jump. At the region competition, Peterson, hurt with a pulled quadricep, competed in the vault-off against Grayson County’s Amelia Hayes after tying with a seven and a half foot vault in the initial jump.

“Coach Garret and I both just kept saying, ‘one more time, one more time.’” Peterson was successful in her efforts and brought home the top spot. She then left Bowling Green and headed to Lexington at the University of Kentucky’s facilities for the State Championship.

“It was an overwhelming experience but also a very exciting experience,” Peterson continued, “To be able to see the top of the top compete is just a different experience… I appreciated every moment I got to have out there.” While Peterson did not place at State, she was still able to gain a lot of knowledge and sight into what the future holds for her. She continued to advance her pole vaulting abilities in the off-season this summer.

“I’m enrolled at D1, where… during the offseason, I go to their more general classes and work on building muscle, stamina, and technique.” Peterson also attends a camp in Arkansas where she trains with a family-owned company of pole vaulting Olympians called Bell Athletics.

“It is insane the work [Bell Athletics] can do with me in the span of three days,” Peterson elaborated. “The improvement I can make there is just a testament to how much better I could be if I was constantly pole vaulting at our own facility at Greenwood where I had free access to it.” Peterson encouraged newcomers of the sport to show up and try it out. She has set some big goals for her upcoming season.

“My goal this season is definitely to make it to state again, but this time be more successful.” She plans to vault as much as she can during the training season so she can be prepared to return to the State Competition. You can catch Jessica Peterson and all of the Greenwood track and field team this spring as they take the field.