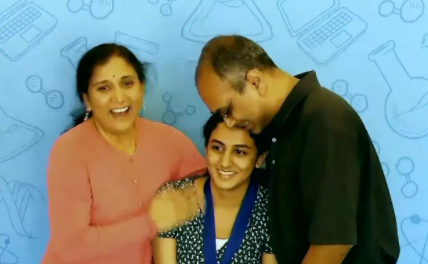 Anika with her parents.

“I have always been amazed by science experiments since my childhood and I was drawn towards finding effective cures for Influenza disease after a severe bout of the infection last year,” she said to 3M. “I would like to learn more from 3M scientists to pursue my drug development and with their help, would like to conduct in-vitro and in-vivo testing of my lead drug candidate.”

Originally, she based her research around the flu; however, the pandemic changed that. After Anika first met with her 3M mentor, Dr. Mahfuza Ali, they quickly decided that she should shift her research to the “spike” protein in SARS-CoV-2.

“I developed this molecule that can bind to a certain protein on the SARS-CoV-2 virus. This protein by binding to it will stop the function of the protein; I started with a database of over 682 million compounds.”

She describes in her submission video that she found the top one-hundred molecules with the highest binding affinity to the druggable binding site on the hemagglutinin protein, and put them through the ADMET test using the admetSAR 2.0 software. ADMET stands for absorption, distribution, metabolism, excretion, and toxicity. These one-hundred molecules were tested to see if they fit all of these properties; which only six did. They were put through a more thorough binding test, which resulted in one lead molecule being the winner. This molecule, once again, binds to the viruses and disables the protein.

“When I was younger my grandpa always used to push me toward science. He was actually a chemistry professor and he used to always tell me to learn the periodic table of elements,” she said. “Over time I just grew to love it.”

She doesn’t just want to take the money for this and run, though; she wants to try and research this further with actual molecules and other scientists and will use some of her prize money to do so. She’s also going to use her money to donate to an organization called AcademyAid, which, as she, herself, describes it, “helps underrepresented students receive a well-rounded education by encouraging STEM and providing supplies to underserved schools in India.”

Anika says that she’s, “a person who aspires to be a lot of things,” and has stated that she wants to be a medical researcher and a professor when she grows up.

You can watch Anika’s submission video to 3M down below.