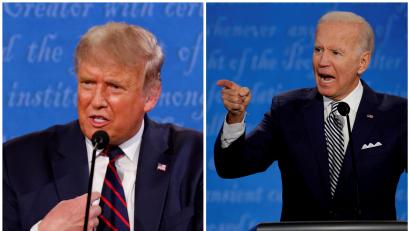 The first Presidential Debate of three was held on September 29, 2020 in Cleveland, Ohio. This was very amped up before it even occurred because the American people knew that it would most likely get rough. It started at 9:00 p.m. EST time and it was to end at 10:30 p.m. This was one of the most chaotic presidential debates in American History. They were to talk about what their plans are for America and how they could benefit the country and the citizens inside. The man that was chosen to be the moderator of the debate was Chris Wallace, an American news anchor and journalist for Fox News. This year was different because of the precautions that they took for COVID-19, so it was already off to a weird start. Donald Trump and Joe Biden didn’t shake hands when they entered, so they went to their podiums and got straight to business.

Chris Wallace wrote up a list of questions to ask both of the candidates that the American people would want to hear. These questions varied from all sorts of things from Taxes, COVID-19, maks, vaccines, and the economy. These are the things that the citizens want to know in order to get more of an idea on who to vote for in November. After each question was asked, the candidates had 2 minutes of uninterrupted time to give their answer and to share what their plans were. Once these 2 minutes were up for each candidate, all chaos broke out.

Chris Wallace made sure to remind Trump and Biden of who the moderator was. The debate was more interruption and arguments than anything and it started to get a little out of hand, and that’s when Wallace interrupted them so that they could move onto the next topic. Between the first and second segment of the debate, Wallace said, “I’m the moderator of this debate.” When the arguing and talking became too much, Wallace would raise his voice and get them to stop taking over one another. “Gentlemen, you realize you’re speaking at the same time?” This hectic debate was hard to watch at some points because of  how much chaos was occurring. The debate lasted a little over an hour and a half long, but some of the questions were still not answered.

The topics that Americans wanted to hear weren’t necessarily addressed compared to the dissing and negativity said from one of the candidates to the opposite candidate. One of the biggest topics that was addressed was the CoronaVirus. This topic formed many debates from each side because it pertains so many little details that will affect the well-being of America and the American people. Biden started off the topic by saying that he would shut things in America down so that the people could have time to get back on their feet because he said that what the American people wanted was “safety”. Trump chimed in and disagreed majorly. He said that if he were elected as president again, he would re-open the economy. He stated that Americans wanted freedom again and that’s what he would bring because some states were starting to feel as if they were in prison. This then started the argument on masks. Joe Biden is usually found wearing a mask at most places he goes to, whereas Trump only wears masks when they are needed. Another big debate boosted from this argument- rallie. Biden asked Trump why he has so many people that come to his rallies. “People want to hear what I have to say”, Trump replied.

As you can see this Presidential debate is unlike any other in American history. Although there were many arguments that broke out because of this debate, the results of the debate came out from it. According to nj.com, the results of the debate were very close; 51.88% of the people voted that Trump won the debate, while 48.12% voted for Biden. There are still 2 more Presidential Debates that are set to take place on October 15 and October 22. This gives both of the candidates time to prepare for what they are going to say when they are handled questions and arguments under pressure. No one can say how the next two debates will go, but we are expecting chaos to break out if it’s anything like how it was on Tuesday. Biden may continue to talk to the American people itself, or Trump will continue to go personal. Whatever the situation is, we know that the road to the election is something that won’t be easy.Presidential Debate Highlights