An Introduction to the Super Mario 64 Iceberg 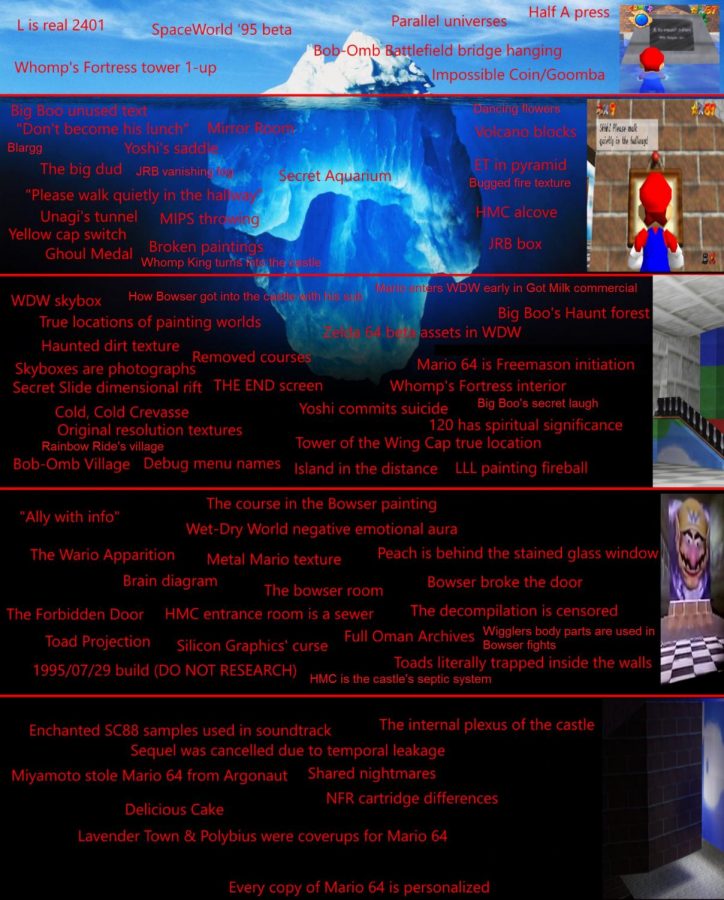 [This article might contain sensitive topics that might not be comfortable for all readers, namely brief mentions of suicide.]

It’s absolutely no shock that conspiracy theories are popular on the internet.

And it truly seems that there’s one about everything. Of course, you have your average JFK assassination theories, the piles of 9/11 theories, the stereotypical, “government is run by lizards” theories, and more recently, conspiracies about COVID. You see them all the time, and they’re definitely weird, for sure.

So what if it got weirder?

A few weeks ago, I noticed this image gaining a lot of traction, simply titled the “Super Mario 64 Iceberg.” If you don’t know what an “iceberg” photo is, it’s a picture of an iceberg, (go figure), meant to represent some sort of topic, divided up into sections. It starts at surface level, but the further down you go, the more strange, out of line, or off-beat these ideologies related to the topic get. I’ve mainly seen it used to mock fanbases on forums like Reddit, or to represent what it’s like to become more interested in a certain topic, but just behind that, it’s most used for conspiracies, and that’s what it’s used for here.

Of course, the mere idea itself is wild, but if you’ve already looked at the photo, you’re almost definitely more confused. Sure, some things just seem like normal mysteries from the game, like missing assets, but; The Silicon Graphics Curse, the Wario Apparition, every copy of the game is personalized? Yeah, to say this would be strange would be an understatement; but it’s also really interesting. So, I want to try and investigate a few of the theories/mysteries from each level, so we can both try and start to understand some of this.

So, Luigi was never in Mario 64. Big deal; but people still wanted him there, hoped he was there. Maybe there was a secret way to unlock him that we just couldn’t find?

People eventually noticed a sign, a very blurry sign, in the courtyard of Peach’s Castle that could barely be made out, and probably doesn’t have a true meaning. However, some people were able to make out a phrase: L is real 2401. This has got to be referring to Luigi, right? Luigi is real, 2401. But what does 2401 mean? Maybe, if you collect 2401 coins, you could unlock him? No, that wouldn’t be possible; there’s only a little over 2000 coins total in the game, give or take. It could be referring to Paper Mario? The bottom line could be read as “in paper m,” so maybe it’s talking about Paper Mario; after all, the game did come out on February 5, 2001, which is very close to 2-4-01, and L was definitely real in that game.

This was a kind-of double mystery surrounding this game forever. First off, what does the sign read, and second, is Luigi hidden in the game?

Well, in July of this year, we had that question answered. The source code for Super Mario 64 was released, meaning that we could crack the files right open and see what was included, and found in the files was a model of Luigi. 24 years, and 1 month after the original release of the game.

As for the sign, no one has quite figured that out yet. With the release of Super Mario 3D All-Stars, some of the textures for the game were updated and made higher quality; however, the sign was not.

Unfortunately, there isn’t really that much interesting about this level unless you’re really into Mario, but I’m going to try and touch on some of these nonetheless.

In the first stage of the game, Bob-omb Battlefield, you have to fight a mini-boss named King Bob-omb. When you return to the stage after he’s defeated, a pink Bob-omb tells you that he’s now “nothing but a big dud.” If you go back to the area where King Bob-omb was, there’s a pit of rolling metal balls. Before he’s defeated, there are only two, but after he is defeated, there are 3 metal balls. That’s got to be him, right?

The Root of the Iceberg

This area is also surprisingly uninteresting. A lot of it is mainly missing content like the last section, so I won’t go over much here.

Super Mario 64 has 120 stars that you can collect in total, and the number 120 is associated with angels. Does this mean anything? Probably not, but it’s cool to think so.

Yes, this is about as out there as it sounds. After you talk to Yoshi on the roof of Peach’s castle, he immediately turns around and jumps off the roof. Some people have said that this is Yoshi committing suicide, after the “abuse” he got in Super Mario World, as Mario hit Yoshi for his tongue to fly out. However, when the source code for the game leaked, (as I mentioned earlier), the file for the animation was found and is labeled as “yoshi_GoHome,” so luckily, nothing bad happened to him.

Okay, enough with the boring stuff. Let’s get into the meat of it.

The Wario Apparition is a boss, or sometimes just a figure of Wario’s floating head found in certain ‘personalized’ versions, (we’ll talk about that later), of Super Mario 64. It can be found in the room by Dire Dire Docks. Essentially, it’s a giant Wario head that appears out of nowhere. He might say, “You want fun? Wario show you fun,” and then will proceed to chase after you, laughing, trying to eat you. If you see this in-game, you’re supposed to turn off your console immediately. If you don’t, there’s a possibility that the player will experience symptoms akin to a stroke, including memory loss.

The theory most likely came from an event at the Nintendo 1996 E3 Showcase, where Charles Marinet, (the voice actor for Mario, Luigi, Wario, and more), played Wario live in the form of a floating head by Dire Dire Docks.

The July 29th, 1995 build of Super Mario 64 might just be the oldest software created for the Nintendo 64. However, it’s speculated that this wasn’t even created by Nintendo, but rather a Japanese organization that helped with the creation of the personalization software, (again, we’ll get there). Playing this game can be extremely harmful to the player, even causing death. In fact, this version of the game is supposed to be so dangerous that it shouldn’t even be researched. So, reader beware.

Absolutely not, no. If every single thing I’ve listed so far for sure wasn’t true, this would be glaringly false.

Let me try to explain what this is referring to.

So first, there’s the Lavender Town conspiracy/creepypasta, also known as “Lavender Town Syndrome,” or the “Lavender Tone.” The story goes that the music for Lavender Town in the original release of Pokémon Red and Green in Japan, (Pokémon Green being the equivalent of Pokémon Blue in the West), had such high frequencies that only children could hear it. The noises were so painful, that it caused nearly two-hundred suicides in children aged 7-12.

Second, there’s the Polybius story. If you’re not familiar with it, it’s about an arcade cabinet used as a government experiment, meant to trigger psychoactive and addictive effects on the player. The game even took lives, giving one player a heart attack.

So, if it hasn’t been obvious to you by now, these stories are very much fake.

And, if I’m reading these correctly, this is supposed to mean that the stories of Polybius and the Lavender Tone were implanted to distract people from the mind control elements of Super Mario 64. No.

I guess the dates for Polybius add up, with SM64 starting development in 1994, and with the first instance of the Polybius story being on the internet in 1994; but Polybius didn’t start gaining traction until early 2000. Plus, the Lavender Town story wasn’t even uploaded until 2010.

And, I’m guessing if one were to believe in this, they would also believe that the stories themselves are real, which, tell me: why would Nintendo use the fact that they were responsible for literally children killing themselves to hide the fact that they were using mind control? Because, I don’t know about you, but I’d much rather figure out that a company was using mind control on me than figure out that they caused 200 suicides. But that’s just me. 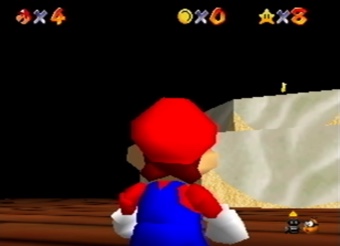 “Delicious Cake” is the name of a supposed Mario 64 level. It’s just an empty wooden room with a cake inside of it.

When you first enter the level, you’re greeted with this message:

There’s a problem… I’m stuck inside the walls.

Mario, you have to save us from that Koopa King!

I am channeling all of my star energy just to talk to you, Mario…

Please take the star atop the cake!

Hopefully it will help you on your journey… Good luck Mario!” 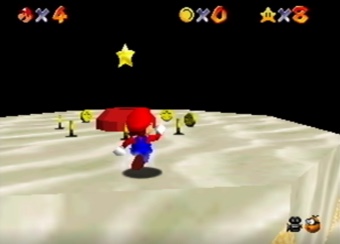 It’s actually very possible that this could have been real, but there isn’t anything in the game files eluding to this even being planned. If it were real, it would be in a beta version of the game, but if that were the case, it wouldn’t make sense that there was only one person that’s uploaded a video of this.

“Not for resale” Cartridges

Cartridges marked with “not for resale” are usually copies of the game that have been heavily personalized. Okay, fine, I’ll explain it now. The big daddy of the Mario 64 Iceberg.

Every copy of Mario 64 is personalized.

Have you ever played Super Mario 64? If you have, it was probably at, say, an uncle’s house, or your cousin’s house, maybe your friend just has a Nintendo 64 that you play a lot. Every time you play the game, doesn’t it seem a little… different to you?

Supposedly, this is because of an experimental Personalization A.I. developed with Nintendo that pulls what you most desire out of the game from your subconscious; the most famous example of this is the Wario Apparition. However, it’s not just creepy and wild changes and shifts like the Wario Apparition; it can also be as simple as determining whether or not the lava dinosaur, Blargg, appears. Even the music is dependant on this; with the Roland SC-88 samples supposedly being “enchanted,” increasing the quality of the soundtrack, if you so desire.

This was first used in the 1995/07/29 build of Mario 64, however, it was in very very early stages, and caused players to see disturbing imagery.

Out of Water (Conclusion)

So, yeah. That was definitely a wild ride. However, this was only scratching the surface of oddities in this photo. If you’re interested in learning more, make sure to check out the video by Mish Koz below, it goes more in-depth about this than I ever could.

Mario 64, if you couldn’t tell by now, is a giant game, and has gone through many, many changes before release. So, I highly recommend you check out “Super Mario 64 Beta Archive” on YouTube. It’s a channel run by two people, covering the many strange and obscure things related to the game, before and after this release. They only have 14 videos so far, but I feel like it’s enough so far to start and slowly kill the Iceberg.